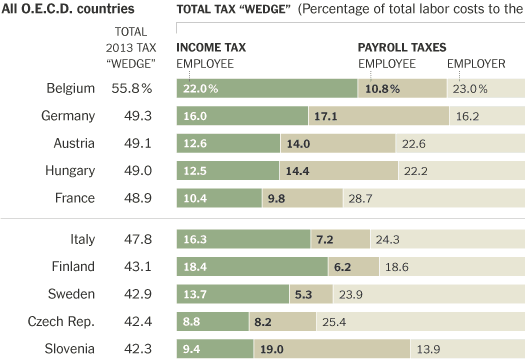 The Organization for Economic Cooperation and Development reports that the average tax on wage income is climbing in many countries.

Total Taxes on Wages Are Rising

AFTER the financial crisis, many countries cut taxes to stimulate their economies. But since 2010, with concerns about government debt rising, the trend has gone the other way.
The Organization for Economic Cooperation and Development, a group of 34 countries that includes all major developed nations, on Friday released its annual Taxing Wages report, looking at how its member countries tax wage income. It found that average tax rates, which fell from 2007 through 2010, have since rebounded almost to 2007 levels.
The rates shown in the accompanying chart are the O.E.C.D. estimates for the taxes that would be levied on an unmarried person who earned the average 2013 wage in the private sector in the country. You should note that the percentage figures are not based on the salary, but on the total cost of the employee to the employer, including corporate payments of payroll taxes, like Social Security taxes in the United States.
The United States has a total 2013 tax burden — called a tax wedge by the O.E.C.D. — of 31.3 percent of total compensation, the study estimated. That was up from 30.4 percent in 2012, an increase largely caused by the end of the American government’s temporary reduction in Social Security tax rates. That left the United States with total wage taxes well below most of the other countries. The O.E.C.D. average was 36 percent.
Other nations with substantial increases last year were Portugal, where tax rates rose as the government followed a European-mandated austerity policy aimed at cutting budget deficits, and the Slovak Republic, which raised employer payroll taxes.
The O.E.C.D. said it thought countries should be changing their tax laws to encourage economic growth. “More needs to be done to shift the burden from labor to other types of taxes,” said Bert Brys, a senior tax economist at the organization’s Center for Tax Policy and Administration. He said environmental taxes and national sales taxes could be raised while taxes on wages were reduced, and he suggested that higher taxes on housing might be called for, partly to ward off new property price bubbles.