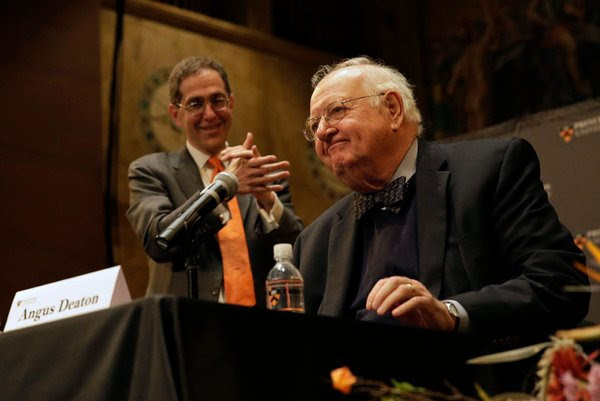 The central contribution of Angus Deaton, the latest winner of the Nobel Memorial Prize in economics, has been to shift the gaze of his fellow economists beyond measures of income, to broader measures of well-being.


Much of his research has focused on consumption — measures of the food people eat, the condition of their housing, and the services they consume. And he has been a trailblazer in shifting the attention of economists away from the behavior of economywide aggregates such as gross domestic product, and toward the analysis of individual households.


This is also the first Nobel to acknowledge explicitly the increasingly empiricalnature of modern economic research. There are probably more such Nobels to come.


Yet for all the power that modern statistics brings, Mr. Deaton has argued forcefully that it is neither a panacea nor a substitute for economic theory.


He has been an influential counterweight against a popular strand of econometric practice arguing that if you want to know whether something works, you should just test it, preferably with a randomized control trial. In Mr. Deaton’s telling, the observation that a particular government intervention worked is no guarantee that it will work again, or in another context. By this view, theory is a complement to measurement, and generalizable insights arise only when the underlying economic mechanisms are elucidated and tested.


Angus Deaton was greeted by his colleagues at Princeton University in Princeton, N.J., after he was awarded the Nobel Memorial Prize in Economic Science.CreditPeter Foley/European Pressphoto Agency


His method of careful analysis of data from household surveys has transformed four large swaths of the dismal science: microeconomics, econometrics, macroeconomics and development economics.


He has brought microeconomics — traditionally a field populated by theorists — into closer connection with the data. Partly because of his influence, modern microeconomists are more likely to spend their days knee-deep in large-scale data sets describing the real-world decisions made by millions of people, and less likely to be mired in Greek-letter abstractions.


Much of the empirical revolution in economics has been enabled by the tools that Mr. Deaton developed. These tools reimagine the role of economic theory, using it to organize and interpret the tidal wave of data coming from the hundreds of household surveys conducted around the world each year.


This focus on empirics has been a boon for the field of econometrics, which is the application of statistical methods to economic problems. Mr. Deaton’s signature achievement in this area has been in forcing empirical researchers to pay closer attention to questions of measurement. For too long, econometric analysis had proceeded as if data were simply handed down from a statistician-loving higher power. The reality is far uglier: Data are imperfect, surveys can be unrepresentative, people misreport, and attempts to recontact survey participants often fail. Mr. Deaton confronts these issues head-on, and he has taught economists how to extract meaning from imperfect data.


For an economist focused on big-picture questions — issues of global poverty — Mr. Deaton remains remarkably grounded in these smaller details. As the Nobel committee put it, Mr. Deaton’s “work covers a wide spectrum, from the deepest implications of theory to the grittiest detail of measurement.”


More than any other economist I know, he understands that to get the big picture right, you’ve got to get all the small details right, too.


This is a lesson that I learned firsthand, as my co-author (and significant other) Betsey Stevenson and I were puzzling over some data that appeared to show that people in certain low-income countries nonetheless reported high levels of life satisfaction. Mr. Deaton, who was equally perplexed, suggested that we dig a little deeper, as he recalled that some of the surveys were not representative samples of the entire population. Sure enough, several weeks of digging through the archives and sifting through the appendices to old codebooks revealed Mr. Deaton to be correct, and those puzzling observations to be simply the result of pollsters surveying only richer (and therefore probably happier) people in those poor countries. These statistical anomalies had partly hidden the strong link between life satisfaction and average incomes.


Mr. Deaton has also made important contributions to macroeconomics, which is the study of the economy as a whole. An earlier generation of macroeconomists had focused on aggregate measures, such as the total levels of consumption or income in the economy. Mr. Deaton turned instead to the behavior of individual households. He was a leader among those rejecting the prevailing fiction that the behavior of the whole economy could be treated as if it were the result of choices made by a single representative consumer.


This distinction between individual and aggregate behavior is particularly important to the study of consumption. While macroeconomists had been satisfied that their theories could explain the relationship between the total level of consumption and total income in the economy, Mr. Deaton showed that those same theories struggled to explain what individual households were doing. This has spawned a large and productive continuing research program trying to understand the spending patterns of actual households.


In 1992, Mr. Deaton argued that further progress on difficult economic questions would be likely “when macroeconomic questions are addressed in a way that uses the increasingly plentiful and informative microeconomic data.” He was right, and newly available “big data” describing the individual saving, spending and investment decisions of thousands and sometimes millions of people are fueling some of the most important work in macroeconomics today.


But perhaps Mr. Deaton’s most important effect has been within the field of development economics, which focuses on the economies of poor countries. This is a research program born of deep personal conviction. As he recently wrote, “Those of us who were lucky enough to be born in the right countries have a moral obligation to reduce poverty and ill health in the world.”


A generation ago, development economics was a field populated by “country doctors” — globe-trotting macroeconomists willing to make house calls to any country willing to provide them with a first-class ticket, so that they could proffer their preferred prescription, be it a more muscular industrial policy, a big push of infrastructure development, increased national savings or a faster shift to a market economy. The countries varied, but the prescriptions rarely did.


Today, development economics is a far more interesting and nuanced field, with practitioners focused on understanding the lives of the poor, and in uncovering the subtle ways in which immature economic institutions hinder their development. Rather than studying a few dozen countries, modern development economists are likely to pore over data describing the economic lives of thousands of families within each country. And much of that data comes from his decades-long collaboration with the World Bank, as his work has inspired much of its recent work on measuring and assessing poverty. The result is a sharper picture of the incidence and causes of global poverty.


More recently, Mr. Deaton has turned his attention to measures of subjective well-being, including happiness. In his 2010 Presidential address to the American Economic Association, Mr. Deaton highlighted the problems in constructing coherent measures of global poverty. Measures of income don’t offer much insight unless they can be thought of in terms of differences in purchasing power. But it is impossible to assess who has more or less purchasing power when people in different countries face different prices and choose to buy different goods. Given this problem, Mr. Deaton makes the radical suggestion that economists just ask people about their well-being instead.


Many of the most important findings on subjective well-being reflect new sources of data that Mr. Deaton — together with the psychologists Ed Diener, Arthur Stone and Daniel Kahneman, a fellow Nobel laureate — have helped create through their role as a senior scientists at Gallup. (Disclosure: I also serve as a senior scientist there.)


The award for Mr. Deaton continues an extraordinary run for Princeton, whose other recent winners include the game theorist John Nash; Mr. Kahneman; the economic theorist Eric Maskin; the trade economist Paul Krugman, who is also a New York Times columnist; and the macroeconomist Chris Sims. Mr. Krugman has since moved to the City University of New York, while Mr. Maskin has returned to Harvard. Even with these departures, Princeton is close to drawing even with the University of Chicago, which still lists five economics laureates on its faculty. There’s a pretty good chance that may happen, as several of Mr. Deaton’s colleagues often feature on Nobel shortlists.


I spent a lovely year at Princeton as a visiting professor in 2012 and can attest that no one commands greater respect among his colleagues than Mr. Deaton. He’s an imposing presence, a man with a giant intellect and an extraordinary breadth of knowledge, who holds all economists to his exacting — indeed, intimidating — standards.


More than that, he’s motivated by the questions that really matter, he is intellectually relentless, he has enormous integrity and he has devoted his life to understanding and improving the lot of the poor. He’s the perfect role model for any young economist.

Past prizes in economics: http://www.nytimes.com/2015/10/13/business/economy/past-winners-of-the-nobel-memorial-prize-in-economic-science.html?_r=1