Trans-Pacific Partnership, as seen by The Economist

Negotiators agree on an ambitious trade deal, but opposition to its ratification is already fierce 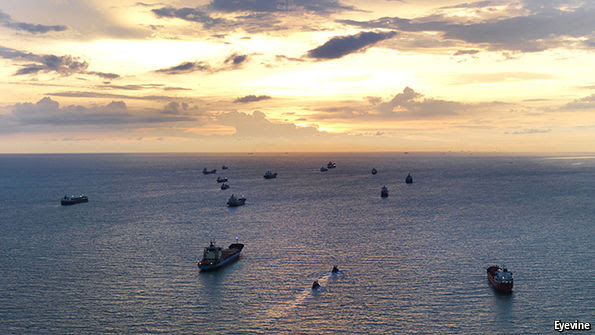 DONALD TRUMP, an American presidential candidate, denounced it as “a terrible deal”. Another, Hillary Clinton, does not think it meets “the high bar” that should be applied to trade pacts. Yet proponents of the Trans-Pacific Partnership (TPP), which encompasses 12 countries in Asia and the Americas, including America and Japan, herald it as the biggest multilateral trade deal in 20 years, which will “define the rules of the road” for international commerce. Which is it?
TPP will apply to 40% of the world’s economy. For American exporters alone, 18,000 individual tariffs will be reduced to zero. Much the same will be true for firms in the other 11 members. Even agricultural barriers, usually among the most heavily defended, will start to come down. Foreigners will gain a toehold in Canada’s dairy sector and a bigger share of Japan’s beef market, for example. Some of these reductions will be phased in lamentably slowly, however: American tariffs on Japanese lorries will last another 30 years.
Tariffs in the region were not that high to begin with, though. More important is TPP’s effort to free trade in services. These are not usually subject to the same impediments as, say, agricultural or automotive imports; instead they get tangled up in beyond-the-border rules, such as customs, visas and licensing. TPP promises greater access to markets for more service providers, which over time should provide a boost to productivity. In spite of scaremongering on the left, the deal does not obviously exalt the interests of big business over those of lowly consumers. For instance, under pressure from Australia, Chile and Peru, America shelved its demand that certain drugs be protected from generic competition for at least 12 years, settling for five instead. In the same vein, TPP’s dispute-settlement mechanism explicitly bars tobacco firms from claiming compensation for public-health rules that harm their business.
To mollify unions and other likely opponents in richer countries, several of TPP’s 30 chapters are devoted to protections for workers and environmental safeguards. There are clauses that attempt to slow deforestation and overfishing. All parties will also be compelled to follow the International Labour Organisation’s basic principles on workers’ rights. They will be required to set a minimum wage and regulate working hours. Vietnam will have to allow unions independent of the Communist Party. Such commitments will be enforceable under the treaty’s dispute-settlement mechanism.
TPP also attempts to limit the extent to which governments can favour state-owned enterprises. Although there are lots of exceptions, this is quite a concession for the likes of Malaysia and Vietnam. According to Matthew Goodman of the Centre for Strategic and International Studies, a think-tank, “The White House feels this is a big one. It validates their definition of TPP as a 21st-century agreement.”
Since the fine print of the deal has not yet been published, and since tariff reductions form so small a part of its measures, it is very difficult to estimate how big a boost TPP will provide its members. The Peterson Institute for International Economics, another think-tank, estimated that it would boost the world economy by $223 billion by 2025. The greatest impact will be felt not in America, but in the less developed members. The study estimates that Vietnamese GDP could rise by as much as an additional 10% over the same period.
In the long run, TPP’s impact will depend on whether or not its membership expands, as it in theory might once the deal is up and running. South Korea, not one of the original 12, is pressing for swift accession. The crucial question is China. Many think America only pushed TPP forward in order to bolster its influence in Asia and counter China’s. But TPP’s economic significance will be severely curtailed if it does not include the country that lies at the heart of almost all Asia’s supply chains. China may now step up its push for a broader regional free-trade deal, built in part on TPP, says Jeffrey Schott, a former American trade negotiator.
Until TPP is ratified by its 12 original members, such talk is premature. This process should be straightforward in places like Japan and Singapore, where the ruling parties have commanding majorities. But Canada faces a knife-edge election on 19th October. One of the three main parties is campaigning against the agreement, arguing that it will kill farm jobs. 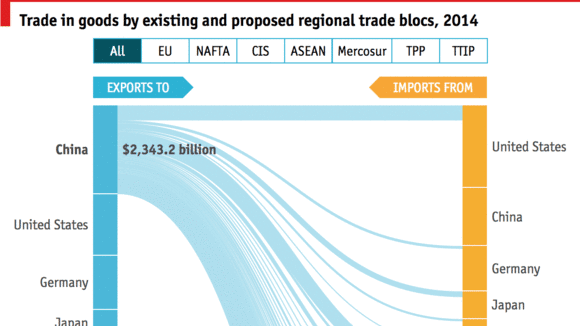 Why countries are so keen to agree new trade deals

The biggest row will be in America, where Congress has 90 days to review the deal before putting it to an up-or-down vote, with no amendments. This “fast-track” procedure was narrowly approved earlier this year, despite opposition on both left and right. But Republicans like Mr Trump are already complaining that the deal grants too many concessions to America’s commercial adversaries. Democrats like Mrs Clinton, meanwhile, say they are worried it will cost America jobs. Republicans, traditionally advocates of free trade, have a majority in both houses of Congress. But trade deals are often unpopular with voters. It does not help that the presidential campaign will be in full swing when Congress votes, or that the deal is seen as part of the legacy of Barack Obama, a toxic figure for Republicans.
Any foot-dragging would be foolish. The slowing of the Chinese economy and a tepid global recovery from the financial crisis have led to a long-term slowdown in world trade. The value of goods shipped around the globe has been shrinking on and off since early 2009. In the first half of the year it slumped by 13% in dollar terms compared to the same period in 2014. In terms of volume, trade is still growing, but by a fraction of the rates that prevailed before the financial crisis.
The problem is not just cyclical: the ever-broader range of goods manufactured within China, among other structural changes, seems to have slowed trade growth permanently. This is worrying because trade remains the most reliable way for poor countries to become richer. TPP would undoubtedly help spur it.