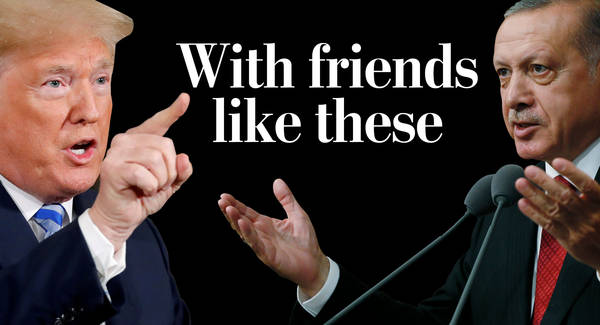 On Friday, the Turkish lira suffered its biggest one-day devaluation in nearly two decades, dropping more than 14 percent against the dollar. The minister of finance — the son-in-law of Turkish President Recep Tayyip Erdogan — couldn’t avert the slide, delivering a halting speech that did little to boost confidence.
But Erdogan, as he so often does, placed the blame on a foreign scapegoat: the United States.
“Shame on you, shame on you,” he declared at a rally. "You are swapping your strategic partner in NATO for a pastor.”
The pastor in question is Andrew Brunson, an American clergyman who has been in Turkish custody since 2016. He is charged with espionage and other crimes — charges that he and U.S. officials reject. Attempts to win his freedom have so far failed.
According to my colleagues, Ankara hoped to swap Brunson for Hakan Atilla, a banker convicted in the United States for his role in a scheme that skirted U.S. sanctions on Iranian oil. But the Trump administration resents Turkey’s use of Brunson as a political hostage. A high-level meeting in Washington last week with a visiting Turkish delegation ended abruptly after the Americans demanded the pastor’s immediate release.
President Trump then announced increased tariffs on Turkish aluminum and steel, which sent the value of the lira plummeting to a historic low. Turkey’s economic woes are of its own making, but the tariffs made things worse — and Trump was only too happy to take credit.
Erdogan continued his complaints in a New York Times op-ed, railing against “unilateral actions against Turkey by the United States, our ally of decades.” He recited the familiar catalog of affronts, including Washington’s unwillingness to hand over Fethullah Gulen, a Muslim cleric accused of fomenting a failed 2016 coup against Erdogan, and continued American support for Syrian Kurdish factions. He then delivered a clear threat, urging Washington to “give up the misguided notion that our relationship can be asymmetrical and come to terms with the fact that Turkey has alternatives.”
If the United States won’t change its approach, Erdogan warned, Turkey will “start looking for new friends and allies.” Indeed, the Turkish president has beefed up ties with Russia, attempted to mend fences with key Western European governments and, as a significant importer of Iranian oil, could undermine American efforts to isolate Tehran.
But this posturing will win him even more enemies in Washington, where Erdogan is already a deeply unpopular figure. Congress has passed legislation making a critical sale of F-35 jets to Turkeycontingent upon terms that include Brunson’s immediate release. Erdogan critics in U.S. foreign-policy circles loathe his creeping authoritarianism. And Trump, unlike previous presidents, has shown an endless willingness to bully erstwhile allies whenever he disagrees with them.
“Washington has generally tried to calm global markets in such moments, especially when investors are gripped by fear of contagion,” noted the Wall Street Journal. “Trump instead squeezed Ankara further.” This had global ramifications: Turkey’s wobbles stoked wider fears of fragility in other emerging markets and raised alarms among some major European banks that hold Turkish debt.
In an interview with Bloomberg News, Aaron Stein, a Middle East expert at the Atlantic Council, suggested Erdogan had badly miscalculated the situation. “The power balance is asymmetric, totally in the U.S. favor,” Stein said. “There are no guard rails to escalation on the U.S. side, and that’s where the Turks have completely, completely messed up in their understanding of what’s going on in the U.S.”
Erdogan’s appeals to NATO partnership ring especially hollow, given both Erdogan’s testy relations with Europe and Trump’s carping about the alliance. "For an administration or a president that doesn’t give much value to NATO, the value of Turkey as a staunch NATO ally also has declined,” Jacob Funk Kirkegaard of the Peterson Institute for International Economics told Bloomberg News. “The Trump administration isn’t going to walk an extra mile to save an organization it doesn’t value.”
Analysts hope cooler heads prevail. “Turkey’s economic and legal problems are obvious, but sanctions by the U. S. are unlikely to help anything,” observed Turkish commentator Mustafa Akyol. “Rather they may be counterproductive, boosting Turkey’s nationalist mood and pushing the country further towards the Russian axis. More diplomacy is needed, not sanctions.”
But productive diplomacy is in short supply. Much of Erdogan’s politics now hinge on stirring nationalist sentiment to justify his tightening grip on the country. He won re-election in June with the backing of ultra-nationalists, arguing that greater control would help him steer Turkey’s flagging economy out of trouble. Instead, things have only gotten worse.
“The current crisis is the culmination of Erdogan’s reckless stewardship. Fixing it will take years — a task that will require new leadership and an entirely different mentality,” wrote Aykan Erdemir, a senior fellow at the Foundation for the Defense of Democracies in Washington and an Erdogan critic.
Nevertheless, even as Turkey suffers, Erdogan may not take much of a political hit. “Turkey’s toothless opposition ... fails to provide much hope,” Erdemir noted. “Without strong political forces to push him out, Erdogan will almost certainly continue to dig himself and the Turkish economy into a deeper hole.”
Trump also may gain more by refusing to compromise. He may relish the chance to act tough and appeal to his core supporters by squeezing a prominent Muslim leader over the fate of an American pastor.
“Backing Brunson plays to the American president’s base — all the more conspicuously so given that NASA scientist Serkan Golge, a dual Turkish–U.S. citizen, is also being held in Turkey, serving out a seven-and-a-half-year sentence for charges similar to those being brought against Brunson,” wrote Elmira Bayrasli, a professor of international affairs at Bard College.
Of course, she noted, there’s a key difference: “Golge is Muslim, unlike Brunson, whom Trump has called ‘a great Christian’ and ‘innocent man of faith.’ The Trump administration has said nothing about Golge’s detention.”
Postado por Paulo Roberto de Almeida às 07:42