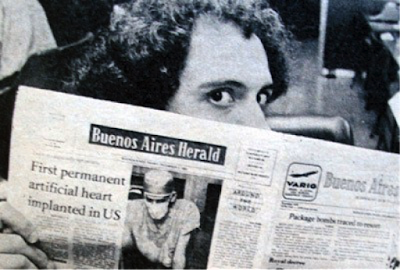 Uki Goñi at The Buenos Aires Herald, in 1982


On the NYR Daily this week

The genesis of “‘Silence Is Health’: How Totalitarianism Arrives,” Uki Goñi’s chilling essay about how a society slides from democracy to dictatorship, was a conversation on a warm Sunday afternoon in early fall last year on a park bench looking out over New York Harbor. Uki had just given a talkat the Museum of Jewish Heritage in Lower Manhattan about how his country, Argentina, had offered sanctuary to numerous Nazi war criminals, including, most notoriously, Adolf Eichmann. It’s a story brilliantly told in his 2002 book on the subject, The Real Odessa.
Because we’d worked together in the past, Uki had asked me to be his interlocutor at the event, and it was afterwards, outside in the September sunshine, that we got to talking about authoritarianism, the 1976–1983 military dictatorship in Argentina, and the disturbing trends in American politics. And that was the seed of what became this week’s featured essay on the Daily. I asked Uki how he’d come to make these connections.
“Researching the Nazi arrivals helped me understand how secret policies are decided on and carried out, in this case the Vatican, Argentine, and Swiss policies to aid fleeing Nazis,” he said. “I also wanted to determine if it was just a historical coincidence that Nazi-like extermination policies were carried out in the country where so many Nazis found refuge after the war.”
The essay relates how Uki had a ringside seat for the deadly collapse of democracy in his country, when he went to work for the English-language Buenos Aires Herald, the only newspaper to report on the junta’s abuses even as thousands of people were “disappeared.” Didn’t he feel vulnerable, wasn’t it terrifying?
“You did it despite the fear. It was like being in a slow-motion car crash. You knew you’d come out damaged, but there was no way out,” he said. The paper’s ethos owed much to its editor Robert Cox—though, eventually, he was forced into exile by death-threats.
“After Cox left, the newspaper toned down its human rights reporting,” Uki recalled. “It was a sad, muted epilogue to a truly unique journalistic crusade to save lives.”
One of the most telling moments in the piece, for me, was an epiphany about family separation. Among the Argentine dictatorship’s roundup of opponents were several hundred pregnant women; the regime waited until they had given birth before executing them, placing their orphaned babies with approved conservative-Catholic, “patriotic” families. This chimed with me because General Franco’s Falangist Spain had done the exact same thing, and on an industrial scale, as I learned this week in Omar Encarnación’s powerful essay “Spain Exhumes Its Painful Past.” But I know that’s not what Uki, who grew up in the US, was thinking of when he wrote: “A society that separates children from their parents, for whatever reason, is a society that is already on the path to totalitarianism.”
Considering that, I was rather desperate for some ray of hope—and I wanted to get Uki’s perspective on how a renewal of democracy, too, can come about, since he had seen out the junta’s bloody rule. “Argentina is a unusual case in that it put its own generals on trial after the return of democracy. But the dictatorship did not fall because of widespread civic resistance, or outspoken politicians or churchmen demanding its end,” he explained. “[It] fell because its mismanagement of the economy left it no other choice but to take the exit door. It was not the triumph of good; it was more evil taking a rest.”
Hmm. Not quite the sunburst of optimism I was looking for. The nearest to that, perhaps, came from the surprise gift Uki sent along after we’d posted his piece—a tweetfrom the British ambassador to the Argentine Republic, Mark Kent: “Total respect to @ukigoni. Military dictatorship is abhorrent wherever and whenever. Well said Uki.” Now, that is Excellency.

For everything else we’ve been publishing, visit the NYR Dailysection of our site. And remember, you can reach the editors of the Daily, me and Lucy McKeon, with your comments and feedback via daily@nybooks.com.
Matt Seaton
Editor,NYR Daily
Postado por Paulo Roberto de Almeida às 18:21