Francis Fukuyama Postpones the End of History
The political scientist argues that the desire of identity groups for recognition is a key threat to liberalism.
ByLouis Menand
The New Yorker, September 3, 2018
Books
September 3, 2018 Issue 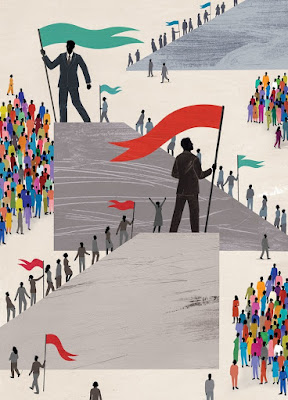 The desire for recognition, Fukuyama argues, is an essential threat to liberalism.
Illustration by Aude Van Ryn

In February, 1989, Francis Fukuyama gave a talk on international relations at the University of Chicago. Fukuyama was thirty-six years old, and on his way from a job at the rand Corporation, in Santa Monica, where he had worked as an expert on Soviet foreign policy, to a post as the deputy director of policy planning at the State Department, in Washington.
It was a good moment for talking about international relations, and a good moment for Soviet experts especially, because, two months earlier, on December 7, 1988, Mikhail Gorbachev had announced, in a speech at the United Nations, that the Soviet Union would no longer intervene in the affairs of its Eastern European satellite states. Those nations could now become democratic. It was the beginning of the end of the Cold War.
At rand, Fukuyama had produced focussed analyses of Soviet policy. In Chicago, he permitted himself to think big. His talk came to the attention of Owen Harries, an editor at a Washington journal called The National Interest,and Harries offered to publish it. The article was titled “The End of History?” It came out in the summer of 1989, and it turned the foreign-policy world on its ear.
Fukuyama’s argument was that, with the imminent collapse of the Soviet Union, the last ideological alternative to liberalism had been eliminated. Fascism had been killed off in the Second World War, and now Communism was imploding. In states, like China, that called themselves Communist, political and economic reforms were heading in the direction of a liberal order.
So, if you imagined history as the process by which liberal institutions—representative government, free markets, and consumerist culture—become universal, it might be possible to say that history had reached its goal. Stuff would still happen, obviously, and smaller states could be expected to experience ethnic and religious tensions and become home to illiberal ideas. But “it matters very little what strange thoughts occur to people in Albania or Burkina Faso,” Fukuyama explained, “for we are interested in what one could in some sense call the common ideological heritage of mankind.”
Hegel, Fukuyama said, had written of a moment when a perfectly rational form of society and the state would become victorious. Now, with Communism vanquished and the major powers converging on a single political and economic model, Hegel’s prediction had finally been fulfilled. There would be a “Common Marketization” of international relations and the world would achieve homeostasis.
Even among little magazines, The National Interestwas little. Launched in 1985 by Irving Kristol, the leading figure in neoconservatism, it had by 1989 a circulation of six thousand. Fukuyama himself was virtually unknown outside the world of professional Sovietologists, people not given to eschatological reflection. But the “end of history” claim was picked up in the mainstream press, Fukuyama was profiled by James Atlas in the New York Times Magazine, and his article was debated in Britain and in France and translated into many languages, from Japanese to Icelandic. Some of the responses to “The End of History?” were dismissive; almost all of them were skeptical. But somehow the phrase found its way into post-Cold War thought, and it stuck.
One of the reasons for the stickiness was that Fukuyama was lucky. He got out about six months ahead of the curve—his article appearing before the Velvet Revolution, in Czechoslovakia, and before the dismantling of the Berlin Wall, in November, 1989. Fukuyama was betting on present trends continuing, always a high-risk gamble in the international-relations business.

This article appears in the print edition of the September 3, 2018, issue, with the headline “What Identity Demands.”
Louis Menand, a staﬀwriter since 2001, was awarded the National Humanities Medal in 2016.