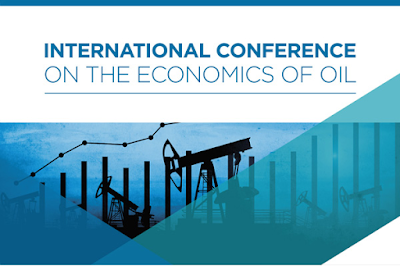 Registration is required, but, the conference will be open and free to the general public. Admissions will be accepted in the order of subscription, limited to the auditorium capacity. Most presentations will be in English and there will be no simultaneous translation from English to Portuguese. However, there will be simultaneous translation from Portuguese to English.
Sign up - Feb. 28  l click here
Sign up - Mar. 1 - 2  l click here

International Conference on The Economics of Oil

Editor’s Note: This article is the second in our “Best of Sovereign Investor Daily” series. It was originally published on December 18, 2012. All the information below is unchanged from the original publication.

In the early spring of 2011, events unfolded 6,400 miles east of New York City that I am confident most Americans missed. It had the effect of robbing the wallet of everyone reading these words.

During a televised speech to a tense nation, King Abdullah bin Abdulaziz announced to his rapt audience that the kingdom of Saudi Arabia, by royal decree, would give to all civil servants and military personnel two months of salary. University students would receive a two-month stipend. Job seekers would receive the equivalent of $533 a month while hunting for work. Minimum wages were increased; 60,000 law enforcement jobs were created; and 500,000 new houses were to be built across the kingdom at a cost of nearly $70 billion. And that was just the beginning of a $130 billion spending program…

It was all part of a well-orchestrated — and exceedingly expensive — effort by Saudi Arabia to quell months of protests that had roiled the already-anxious kingdom and which were tied to much-broader clashes across the Middle East and North Africa.

King Abdullah had, in effect, bought the peace — for the time being, at least.

For most Americans, the king’s speech seems entirely irrelevant. But it impacts every single one of us every day.

For you see, the costs that King Abdullah imposed on Saudi Arabia that March day suddenly changed the dynamics of the oil market. A new cost structure was added to each barrel of oil pulled from beneath the desert sands — a social cost. And so long as tensions exist across the region between Arabic leaders and local populations that feel oppressed, that social cost is going nowhere but up.

It’s why those who call for lower oil prices are overlooking a crucial piece of the oil market.

I’ve read a lot of jibber-jabber recently about the miniscule costs countries like Saudi Arabia have for lifting oil out of the ground. Some Saudi fields purportedly have lifting costs of just $2 a barrel. Russia’s lifting costs in some instances are said to top no more than $15.

That may be true. But only the addle-brained believe that either of those countries can profitably sell oil anywhere near those levels. They can’t sell oil profitably at $50 a barrel. And it’s because of the social costs.

Buying the peace is how oppressive governments bribe their people and maintain social order — no easy task in parts of the world where religious minorities often rule over very angry majorities comprised of the religious opposition. In many of those countries, human misery is rife and poverty rates range as high as 60% … and hungry, impoverished people are the foot-soldiers of revolution, as Tunisian, Egyptian and Libyan leaders have learned.

Saudi Arabia and Russia are the world’s #1 and #2 oil-producing countries. They’re also political economies that generate lots of animosity and, on occasion, anti-government protests. To assuage the anger that bubbles up — or to keep it below a boil in the first place — both countries throw around huge sums of riyals and rubles.

And the question is: Where does the money come from?

In Russia, oil generates more than 45% of government revenues. In Saudi Arabia, it’s up near 75%.

Leaders in both countries have no choice but to rely heavily on oil to fund the civic largess … which means they have every incentive to manipulate oil prices through production.

Prior to its $130 billion social-spending spree, Saudi Arabia needed oil prices somewhere north of $70 to balance the kingdom’s budget, according to the International Monetary Fund. Now the per-barrel cost is reportedly approaching $100. Russia needs something close to $120.

To be clear, I am picking on the Saudis and the Russians simply because of the size of their oil industries and the political issues with which those countries struggle. But the reality is that social costs also play a similarly large role in Bahrain, Kuwait, Venezuela, Iran and elsewhere, where oil revenue accounts for up to 90% of domestic income.

The United Arab Emirates, for instance, needs oil prices in the $85 range to balance a budget larded with social programs. Tiny Bahrain needs about $119.

$100 a Barrel is Middle-of-the-Road
This is where the argument goes astray that American energy independence — still a giant question mark — will drop oil prices to $50 or below. Unless America is going to produce enough oil for the world — and, honestly, we will never even produce enough for ourselves — it won’t control prices.

Oil prices sustained at $50 a barrel would crimp the ability of oppressive governments to quiet the angry masses. That would lead to potential revolt or overthrow, which would have the perverse effect of pushing oil prices back up, since the risk exists that a regime intolerant of the West would take power and drastically reduce oil supplies to undermine Western economies.

Thus, any time oil prices get so low that they begin to cause societal tinges wherever governments lean on oil to cover their social costs, those countries will naturally rely on the power of the spigot. All they need do is clamp off production until prices reach a more-adequate level.

Take a look at this graph. It’s oil as priced in the Middle East. I’ve highlighted $100 to make the point that it’s clear where the floor for oil rests. It’s not a coincidence that oil is bouncing around the range that leading oil nations need to balance budgets that are overloaded with social costs.

Over the last two years, in fact, Middle Eastern oil has traded below $80 a barrel for just 16 days, and that was largely during the overreaction to European debt woes this past summer. More impressive is the fact that these sustained prices above $100 have occurred even as the top three oil nations have been producing barrels at record levels.

Yes; it’s true that U.S. benchmark crude — West Texas Intermediate — will often trade at cheaper prices, and sometimes down into the $80 or $90 range. But oil is priced regionally all over the world. And if oil in the Middle East were to push continually higher from here as nations pay for their social programs, and then U.S. prices would march higher too.

The Future of Oil
I listen to what the disbelievers write when they say oil prices are headed lower. I think about their rationale for oil at $50 or below. But ultimately, their arguments are simplistic and too often built on the nationalistic hoopla about America’s nascent oil renaissance (and there are so many misconceptions about American oil that even their rationale is seriously flawed).

Even if some fields in America can produce oil at a sub-$50 cost, that oil is still subject to global pricing. And when you have oppressive nations spending money furiously to maintain social order, there’s simply no way oil prices spend any time near $50 a barrel outside of a major, global financial upset.

If you recognize that, and if, in turn, you litter your portfolio with energy-related stocks — oil-field servicers, drillers, rig owners, exploration companies and the energy majors — you will protect your standard-of-living as oil prices inexorably rise over time.

Until next time, stay Sovereign …

Editor’s Note: Cheap oil continues to be little more than a dream for Americans, with crude prices pushing ever higher. In the 18 months that have passed since this article was originally released, we’ve had new civil unrest in Iraq, Russia thumbing its nose at the world as it swallows up Crimea, and Venezuela is struggling through economic collapse — all factors determined to keep oil prices high so these countries can stay afloat.  With Middle East and other oil-producing countries dependent on black gold to keep the wheels of government turning and the people placated, the days of cheap oil are long gone.
Postado por Paulo Roberto de Almeida às 21:44 Nenhum comentário: 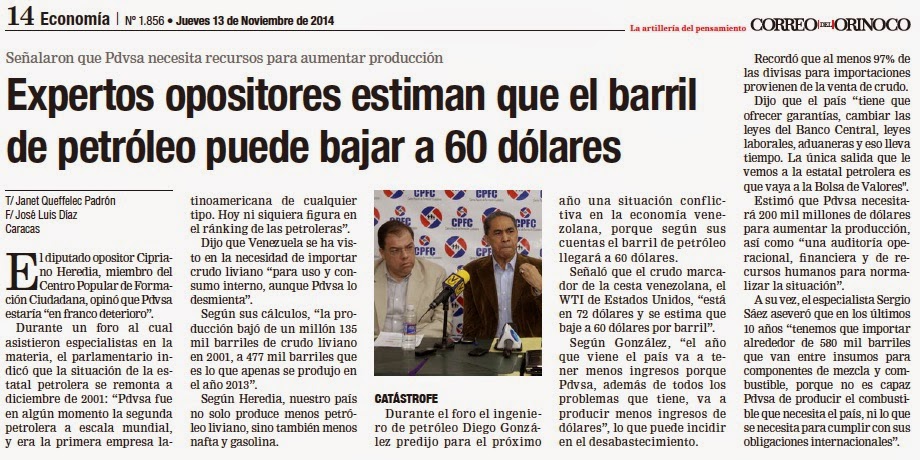