The Fog of Ambition

Our Man: Richard Holbrooke and the End of the American Century 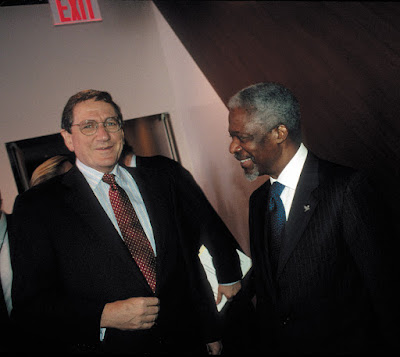 “Almost great” is George Packer’s measured judgment on the life and character of the American diplomat Richard Holbrooke, who was trying to broker an end to the war in Afghanistan when he died suddenly in 2010. Holbrooke left the war pretty much as he found it, and peace is no closer now, nearly a decade later, but that isn’t what explains the cruel precision of Packer’s judgment. It’s the man. Holbrooke had the serious intent, the energy, the friends, the wit, and even the luck needed to accomplish great things, but he fell short. Packer circles the question of why in his new biography, Our Man: Richard Holbrooke and the End of the American Century, but the force of the man survives the interrogation. Holbrooke spills out in all directions in the manner of Walt Whitman, who waved aside the contradictions that others saw, saying, “I am large, I contain multitudes.”
Holbrooke was not only physically big but had an emphatic personality, could dominate a room, made friends and kept most of them, read widely and greedily, and was a bit overwhelming when he turned his attention on you. It is evident that Packer got the full treatment. They met when Holbrooke had been hovering at the edge of great for decades. As a young Foreign Service officer in Vietnam he knew the war was lost before General William Westmoreland took command of US forces there in 1964. He told early bosses he would be an assistant secretary of state by the age of thirty-five and was (for East Asian and Pacific affairs), and later under President Bill Clinton he served as the American ambassador to Germany and to the United Nations.
The accomplishment cited in the first paragraph of all his obituaries came in the mid-1990s, between his two ambassadorships, when he was an assistant secretary of state for the second time (for European and Canadian affairs). His writ included the warring states of the former Yugoslavia, which were led by intransigent men waging a genocidal war. In the fall of 1995 Holbrooke reasoned and coaxed and threatened these men into signing a peace agreement named for the Ohio city where he achieved what many considered a miracle—the Dayton Accords. That peace has been kept for twenty-three years, and Holbrooke was trying to do the same in Afghanistan in 2009 when Packer published a profile in The New Yorker of the man he already considered a friend.
“What I’m thinking about,” Packer wrote fifteen months later, on the day Holbrooke died,

is not Holbrooke’s role on the world stage, but Richard on the phone for six minutes, or seated across the table, eyebrows lifted and mouth slightly open with barely suppressed mirth. He was the most excellent company. My wife and I were supposed to have dinner with Richard and Kati [Marton, his wife] this Friday. I’ll always wish that evening had come sooner.

It’s wild and crass…. It brings a noticeable smell into the room. It’s a man cajoling a bereaved widow to include him among her late husband’s eulogists, then rearranging name cards so that he can chat up the right dinner guest after the service.