In country after country, increased government spending acted more like a depressant than a stimulant.

By ARTHUR B. LAFFER

The Wall Street Journal, August 6, 2012
Policy makers in Washington and other capitals around the world are debating whether to implement another round of stimulus spending to combat high unemployment and sputtering growth rates. But before they leap, they should take a good hard look at how that worked the first time around.
It worked miserably, as indicated by the table nearby, which shows increases in government spending from 2007 to 2009 and subsequent changes in GDP growth rates. Of the 34 Organization for Economic Cooperation and Development nations, those with the largest spending spurts from 2007 to 2009 saw the least growth in GDP rates before and after the stimulus.


The four nations—Estonia, Ireland, the Slovak Republic and Finland—with the biggest stimulus programs had the steepest declines in growth. The United States was no different, with greater spending (up 7.3%) followed by far lower growth rates (down 8.4%).
Enlarge Image 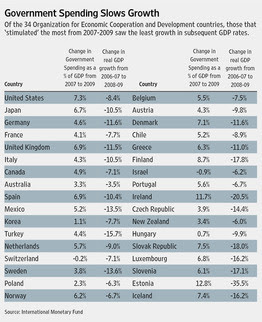 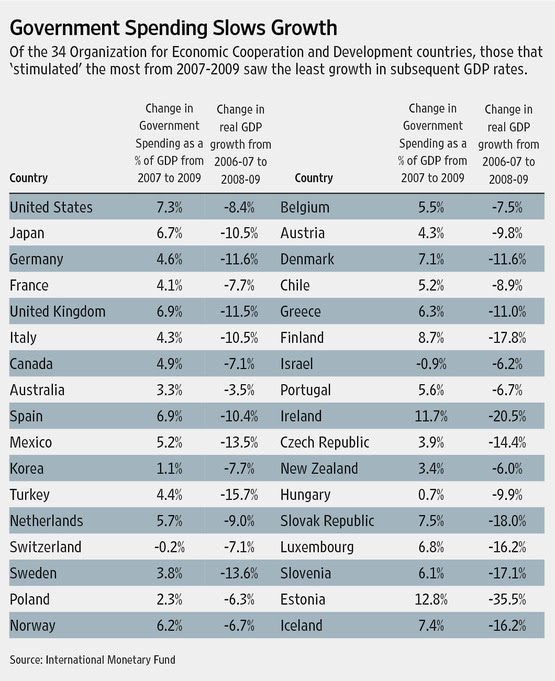 Still, the debate rages between those who espouse stimulus spending as a remedy for our weak economy and those who argue it is the cause of our current malaise. The numbers at stake aren't small. Federal government spending as a share of GDP rose to a high of 27.3% in 2009 from 21.4% in late 2007. This increase is virtually all stimulus spending, including add-ons to the agricultural and housing bills in 2007, the $600 per capita tax rebate in 2008, the TARP and Fannie Mae and Freddie Mac bailouts, "cash for clunkers," additional mortgage relief subsidies and, of course, President Obama's $860 billion stimulus plan that promised to deliver unemployment rates below 6% by now. Stimulus spending over the past five years totaled more than $4 trillion.


If you believe, as I do, that the macro economy is the sum total of all of its micro parts, then stimulus spending really doesn't make much sense. In essence, it's when government takes additional resources beyond what it would otherwise take from one group of people (usually the people who produced the resources) and then gives those resources to another group of people (often to non-workers and non-producers).
Often as not, the qualification for receiving stimulus funds is the absence of work or income—such as banks and companies that fail, solar energy companies that can't make it on their own, unemployment benefits and the like. Quite simply, government taxing people more who work and then giving more money to people who don't work is a surefire recipe for less work, less output and more unemployment.
Yet the notion that additional spending is a "stimulus" and less spending is "austerity" is the norm just about everywhere. Without ever thinking where the money comes from, politicians and many economists believe additional government spending adds to aggregate demand. You'd think that single-entry accounting were the God's truth and that, for the government at least, every check written has no offsetting debit.
Well, the truth is that government spending does come with debits. For every additional government dollar spent there is an additional private dollar taken. All the stimulus to the spending recipients is matched on a dollar-for-dollar basis every minute of every day by a depressant placed on the people who pay for these transfers. Or as a student of the dismal science might say, the total income effects of additional government spending always sum to zero.
Meanwhile, what economists call the substitution or price effects of stimulus spending are negative for all parties. In other words, the transfer recipient has found a way to get paid without working, which makes not working more attractive, and the transfer payer gets paid less for working, again lowering incentives to work.
Enlarge Image 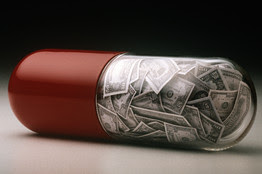 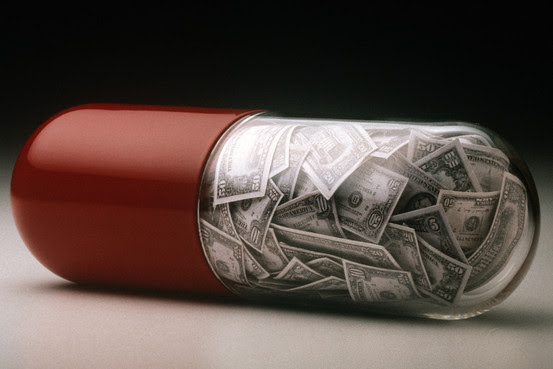 Getty Images
But all of this is just old-timey price theory, the stuff that used to be taught in graduate economics departments. Today, even stimulus spending advocates have their Ph.D. defenders. But there's no arguing with the data in the nearby table, and the fact that greater stimulus spending was followed by lower growth rates. Stimulus advocates have a lot of explaining to do. Their massive spending programs have hurt the economy and left us with huge bills to pay. Not a very nice combination.


Sorry, Keynesians. There was no discernible two or three dollar multiplier effect from every dollar the government spent and borrowed. In reality, every dollar of public-sector spending on stimulus simply wiped out a dollar of private investment and output, resulting in an overall decline in GDP. This is an even more astonishing result because government spending is counted in official GDP numbers. In other words, the spending was more like a valium for lethargic economies than a stimulant.
In many countries, an economic downturn, no matter how it's caused or the degree of change in the rate of growth, will trigger increases in public spending and therefore the appearance of a negative relationship between stimulus spending and economic growth. That is why the table focuses on changes in the rate of GDP growth, which helps isolate the effects of additional spending.
The evidence here is extremely damaging to the case made by Mr. Obama and others that there is economic value to spending more money on infrastructure, education, unemployment insurance, food stamps, windmills and bailouts. Mr. Obama keeps saying that if only Congress would pass his second stimulus plan, unemployment would finally start to fall. That's an expensive leap of faith with no evidence to confirm it.
Mr. Laffer, chairman of Laffer Associates and the Laffer Center for Supply-Side Economics, is co-author, with Stephen Moore, of "Return to Prosperity: How America Can Regain Its Economic Superpower Status" (Threshold, 2010).
A version of this article appeared August 6, 2012, on page A13 in the U.S. edition of The Wall Street Journal, with the headline: The Real 'Stimulus' Record.
Posted by Paulo Roberto de Almeida at 10:58