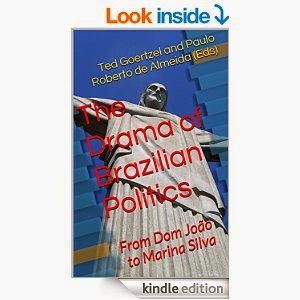 Online publishing makes this brand new book both more timely and less expensive than conventional texts. It is available in Kindle format, and can be read on any tablet, computer or smart phone. The price is only $2.99 including free shipping.  Or you can borrow it for free if you belong to Amazon Prime.
It is appropriate for classes in Brazilian or Latin American history or politics and could be added in the middle of the semester.

Here are the details:

Preface
Introduction, by Ted Goertzel
1. The Drama of Brazilian Politics: from Dom João to Marina Silva, by Ted Goertzel
2. The Politics of Economic Regime Change in Brazilian History, by Paulo Roberto de Almeida
3. The Brazilian Presidency: From the Military Regime to the Workers’ Party, by João Paulo M. Peixoto
4. A Woman’s Place is in the Presidency: Dilma, Marina and Women’s Representation in Brazil, by Farida Jalalzai and Pedro G. dos Santos
5. A Brazilian ex-President’s Public Speech: A Threat to the Existing Order?, by Inês Signorini
6. Life Without Turnstiles, by Alipio de Sousa Filho
7. The Changing Face of Brazilian Politics: Lessons of the 2013 Protests, by Sue Branford and Jan Rocha
8. Political Leadership and Protest in Brazil: The 2013 Vinegar Revolt in Comparative Perspective, by Guy Burton
9. Presidential Leadership and Regime Change in Brazil with Comparisons to the United States and Spanish America, by Ted Goertzel


This book was conceived by Ted Goertzel in the summer of 2012 as part of his life-long interest in Brazil and “elective affinity” with things Brazilian, going back to his days as a participant observer in the Brazilian student protests of 1966 to 1968. After publishing biographies of two of Brazil’s presidents, he found that there was very little scholarly literature on the role of the presidency in Brazilian politics and society. Rather than undertake such a comprehensive study on his own, he decided to consult some members of the Brazilian Studies Association to find colleagues who shared an interest in putting the Brazilian presidency in an historical perspective and a comparative context.
The experts who responded came from different countries – Brazil, England and the United States – and varied widely in their ideological and dispositions and professional backgrounds. We have made no effort to homogenize the chapters; each has a clear authorial voice. Paulo Roberto de Almeida, a diplomat doublé as academic, responded very enthusiastically to this project, and was able to contribute with his life-long acquaintance of all-things Brazilian and as well as a deep knowledge of American Brazilianists, a by-product of his “elective affinities” with this community of scholars.
The Brazilian Protests of mid-2013 took place as we were working on this project and stimulated us to think as much about Brazil’s future as its past. While the protests were largely unexpected in Brazil, they fitted into theories of presidential leadership and regime change. We wanted to use our historical and comparative research to offer what insight we could into the future.
We also wanted to make our work available in October, 2014, when interest would be high because of the Brazilian presidential elections. So we took advantage of e-book technology to bring the reader a volume that is both timelier and less expensive than traditionally published volumes. We plan to use the same technology to update the volume after the elections, and we invite readers to contact us with comments and suggestions, as well as with corrections for any errors they may find.
We expect this work to offer, both for scholars and for the general public, a comprehensive understanding of the Brazilian political system in its contemporary developments and challenges.