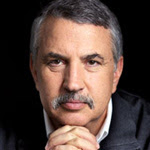 Thomas L. Friedman
OVER the past few weeks I’ve been reading Ken Adelman’s fascinating history “Reagan at Reykjavik: Forty-Eight Hours That Ended the Cold War.” Adelman, who led Reagan’s arms control agency, was an adviser at Reagan’s 1986 Iceland summit meeting with Soviet President Mikhail Gorbachev. Using some newly declassified documents, Adelman fills out the extraordinary dialogue between the two leaders that set in motion a dramatic cut in nuclear arms.
You learn a lot about Reagan’s leadership in the book. For me, the most impressive thing was not Reagan’s attachment to his “Star Wars” strategic defense initiative, which is overrated in ending the Cold War. What is most impressive about Reagan is that he grasped that Gorbachev was a radically different kind of Soviet leader — one with whom he could make history — long before his intelligence community did. That made a big difference.
These days there is a lot of “if-only-Obama-could-lead-like-Reagan” talk by conservatives. I’ll leave it to historians to figure out years from now who was the better president. But what I’d argue is this: In several critical areas, Reagan had a much easier world to lead in than Obama does now.
“Easier world, are you kidding?” say conservatives. “Reagan was up against a Communist superpower that had thousands of nuclear missiles aimed at us! How can you say that?”

The defining struggle of President Ronald Reagan’s day was the Cold War with the Soviet Union and Mikhail Gorbachev. President Obama’s challenges are totally different.
PETER MARLOW / MAGNUM PHOTOS
Here’s how: The defining struggle in Reagan’s day was the Cold War, and the defining feature of the Cold War was that it was a war between two differentsystems of order: Communism versus democratic capitalism. But both systems competed to build order — to reinforce weak states around the world with military and economic aid and win their support in the Cold War. And when either Moscow or Washington telephoned another state around the world, there was almost always someone to answer the phone. They even ensured that their proxy wars — like Vietnam and Afghanistan — were relatively contained.
Obama’s world is different. It is increasingly divided by regions of order and regions of disorder, where there is no one to answer the phone, and the main competition is not between two organized superpowers but between a superpower and many superempowered angry men. On 9/11, we were attacked, and badly hurt, by a person: Osama bin Laden, and his superempowered gang. When superempowered angry men have more open space within which to operate, and more powerful weapons and communication tools, just one needle in a haystack can hurt us.
Most important, Reagan’s chief rival, Gorbachev, won the Nobel Peace Prize in 1990 for doing something he never wanted to do: peacefully letting go of Eastern Europe. Obama’s foes, like the Islamic State, will never win the Nobel Peace Prize. Reagan could comfortably challenge Gorbachev in Berlin to “tear down this wall” because on the other side of that wall was a bad system — Communism — that was suppressing a civilization in Eastern and Central Europe, and part of Russia, that was naturally and historically inclined toward democratic capitalism. And there were leaders there — like Lech Walesa, another Nobel Peace Prize winner — to lead the transition. We just needed to help remove the bad system and step aside.

“The countries of Eastern and Central Europe were forcibly part of a Communist empire but culturally were always part of Western civilization,” explained Michael Mandelbaum, the Johns Hopkins University foreign policy specialist and author of “The Road to Global Prosperity.” “They never saw themselves as Communist, but rather as Westerners who had been kidnapped.” After Gorbachev, under pressure from Reagan and the West, released them, “they ran as fast as they could to embrace Western institutions.”
In the Middle East, which has consumed so much of Obama’s energy, the people tore down their walls — their systems — but underneath was not a civilization with the suppressed experience, habits and aspirations of democracy and free markets. Instead it was a toxic mix of Islamism, tribalism, sectarianism and an inchoate aspiration for democracy.
Reagan’s leadership challenge was to bring down a wall and then reap the peace dividends by just letting nature take its course. Obama’s challenge is that on the other side of the wall that the Arabs took down lies the world’s biggest nation-building project, with a civilization that is traumatized, divided and often culturally hostile to Western values and institutions. It’s an enormous job that only the locals can lead.
The one time that Reagan faced the miniversion of Obama’s challenge was in Lebanon. After Israel toppled the Palestinian ministate there, Reagan hoped it would unleash a naturally democratic order, with just a little midwifing help from American Marines. But after 241 U.S. servicemen were blown up in Beirut in 1983, Reagan realized that the civilization there was a mix of Islamists, sectarian Christians, Syrians, Shiite militias, Palestinian refugees and democrats. It required a lot more than us just standing guard. It required nation-building. And what did Reagan do? He left.
I was there to wave goodbye to the last Marines on the beaches of Beirut.
So comparing Reagan with Obama in foreign policy is inevitable. But when you do, also compare their respective contexts. The difference is revealing.