3. China wants to be the world leader on Artificial Intelligence by 2030

Meanwhile, China’s internet of things (IoT) industry has quietly grown at a rate of 25% annually to $142 billion in size. The government is encouraging China to become a leader in new emerging technology industries like IoT and artificial intelligence (AI), under the “Made in China 2025” and “Internet Plus” plans. This is spurring domestic innovation at unprecedented levels. The national plan on becoming the world leader in AI by 2030 was released earlier this summer, leading many companies to consider their China investment strategies in a different light; Google, for example, seems to be putting together a China-based AI team. 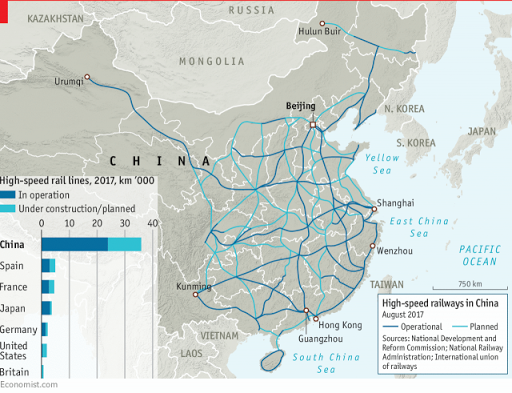 China is expanding its high-speed rail network, already the largest in the world by far. Image: The Economist

China already has the largest high-speed train network in the world but it’s planning to increase it even further by 2020. It has become even faster, too, with the introduction of the next-generation, 350kph Fuxing trains and is extending new technologies, such as driverless subway trains and maglev lines, into its municipal transport systems as well. However, one of the biggest announcements to hit the news this month — China’s plan to build a hyperloop network of very high-speed trains travelling in hermetically sealed tubes — is garnering some more sceptical views.