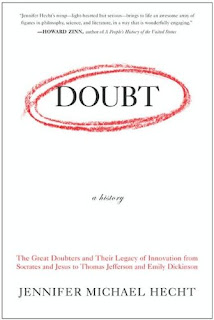 Doubt: A History: The Great Doubters and Their Legacy of Innovation from Socrates and Jesus to Thomas Jefferson and Emily Dickinson - Kindle Edition
by Jennifer Hecht (Author)


In the tradition of grand sweeping histories such as From Dawn To Decadence, The Structure of Scientific Revolutions, and A History of God, Hecht champions doubt and questioning as one of the great and noble, if unheralded, intellectual traditions that distinguish the Western mind especially-from Socrates to Galileo and Darwin to Wittgenstein and Hawking. This is an account of the world's greatest ‘intellectual virtuosos,' who are also humanity's greatest doubters and disbelievers, from the ancient Greek philosophers, Jesus, and the Eastern religions, to modern secular equivalents Marx, Freud and Darwin—and their attempts to reconcile the seeming meaninglessness of the universe with the human need for meaning,
This remarkable book ranges from the early Greeks, Hebrew figures such as Job and Ecclesiastes, Eastern critical wisdom, Roman stoicism, Jesus as a man of doubt, Gnosticism and Christian mystics, medieval Islamic, Jewish and Christian skeptics, secularism, the rise of science, modern and contemporary critical thinkers such as Schopenhauer, Darwin, Marx, Freud, Nietzsche, the existentialists.

Cited midway through this magisterial book by Hecht (The End of the Soul), the Zen maxim "Great Doubt: great awakening. Little Doubt: little awakening. No Doubt: no awakening" reveals that skepticism is the sine qua non of reflection, and discloses the centrality that doubt and disbelief have played in fueling intellectual discovery. Most scholarship focuses on the belief systems that have defined religious history while leaving doubters burnt along the wayside. Hecht's poetical prose beautifully dramatizes the struggle between belief and denial, in terms of historical currents and individual wrestlings with the angel. Doubt is revealed to be the subtle stirring that has precipitated many of the more widely remembered innovations in politics, religion and science, such as medieval Jewish philosopher Gersonides's doubt of Ptolemaic cosmology 200-300 years before Copernicus, Kepler or Galileo. The breadth of this work is stunning in its coverage of nearly all extant written history. Hecht's exegesis traces doubt's meandering path from the fragments of pre-Socratics and early religious heretics in Asia, carefully elucidating the evolution of Hinduism, Jainism and Buddhism, through the intermingling of Eastern and Western religious and philosophical thought in the Middle Ages that is often left out of popular histories, to the preeminence of doubt in thrusting open the doors of modernity with the Cartesian "I am a thing... that doubts," ergo sum. Writing with acute sensitivity, Hecht draws the reader toward personal reflection on some of the most timeless questions ever posed.
Copyright 2003 Reed Business Information, Inc.

*Starred Review* Let others admire cathedrals: poet and historian Hecht celebrates the creations of doubters. In this remarkably wide ranging history, Hecht recounts how doubters from Socrates to Wittgenstein have translated their misgivings about regnant orthodoxies into new philosophic insights and political horizons. Though she explores the skepticism of early Greek thinkers challenging pagan gods, the tantric doubts of Tibetan monks chanting their way to enlightenment, and the poetic unbelief of heretical Muslim poets, Hecht gives center stage to Christianity, the religion that made doubt newly visible--and subversive--by identifying faith (not law, morality, or ritual) as the very key to salvation. Readers witness the martyrdom of iconoclastic doubters such as Bruno, Dolet, and Vanini, but Hecht also illuminates the wrenching episodes of doubt in the lives of passionate believers, including Paul and Augustine. In Jesus' anguished utterances in Gethsemane and at Calvary, Hecht hears even Christ experiencing the agony of doubt. Indeed, Hecht's affinity for the doubters who have advanced secular democracy and modern art does not blind her to the hidden kinship between profound doubters and seminal believers: both have confronted the perplexing gap between human aspirations and their tragic contradictions. In her provocative conclusion, Hecht ponders the novelty of a global confrontation pitting America not against the state-sanctioned doubt of Soviet atheism but, rather, against a religious fundamentalism hostile to all doubt. Bryce Christensen
Copyright © American Library Association. All rights reserved