As Roberts reminds us, Churchill was unsuccessful in a number of those positions, but never incompetent. He acquired a vast administrative and legislative experience and by that time had been considered for decades one of Britain’s greatest orators. Roberts enumerates a long list of Churchill’s serious errors in public life, before and after his elevation in 1940. These include his opposing the vote for women; his handling of much of the Gallipoli operation and perhaps the entire concept (which led to 250,000 casualties in a failed effort to break open the Dardanelles in 1915); his treatment of Ireland and India; his keenness for reversion to the gold standard; his support of Edward VIII in the abdication crisis, his mismanagement of the Norway campaign; his assistance of Greece in 1941; his gross underestimation of the military strength of Japan; his faith in Italy as “the soft underbelly” of Hitler’s Europe; his advocacy of peripheral campaigns in the Dodecanese, Norway, Trieste, and Sumatra; and his deporting the alleged Soviet deserters back to Russia at the end of the war (another 1.2 million executions on Stalin’s gruesome ledger). 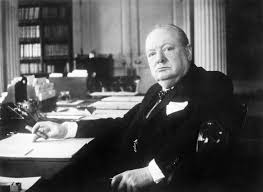 Winston Churchill at his desk in the Cabinet Room at 10 Downing Street, London, in 1942. Photo: Wikimedia Commons