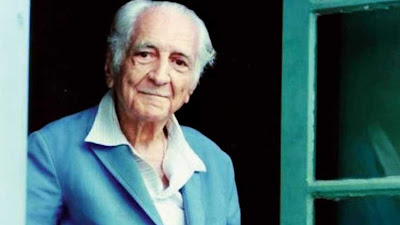 When a Brazilian historian met Tagore in New York

By A.R. Venkatachalapathy
The Nobel Prize won Rabindranath Tagore world renown. With our colonial hangover, we often conflate the world with the West. But Tagore’s fame spread was not confined to the West. He was feted in China and in Japan as well. To this one must add Latin America. Within years of the Nobel, Tagore’s poems were being translated into Spanish. Tagore even made a short, if truncated, visit to Argentina in late 1924 and early 1925. In 1924, a twenty-year-old Pablo Neruda paraphrased a poem from Tagore’s The Gardener in his Twenty Love Poems and a Song of Despair. The book sold over a million copies, and the poet himself went on to win a Nobel about half a century later. Translated into most Indian languages, the Chilean poet writing in Spanish needs little introduction.
At about the same time that Neruda paid poetic tribute to Tagore, another brilliant young Latin American, a Portuguese-speaking Brazilian, met Tagore in New York. This was the historical sociologist, Gilberto Freyre (1900-1987, picture). Not nearly as well known globally as Neruda, Freyre is nonetheless a major cultural figure in Brazil. His trilogy on the making of modern Brazil through its colonial encounter — The Masters and the Slaves, The Mansions and the Shanties, and Order and Progress — remains a classic. Of Freyre’s work it has been said that it almost single-handedly changed Brazil’s image of itself: at ease with its own identity, it no more wished to be like Europe. Celebrating miscegenation, Freyre pushed Brazil to see itself as a fusion of three cultures — native Indian, Portuguese and African. Freyre’s mastery of the historian’s craft and sociological theory apart, he was a literary stylist. Despite many stints in various prestigious universities across the world, Freyre was more a public intellectual. Immersed in politics — he was once Brazil’s delegate to the United Nations with the rank of an ambassador — Freyre’s support for the Salazar dictatorship in Portugal and the Branco dictatorship in Brazil made him controversial.
Freyre’s reputation in the English-speaking world owes much to his discovery by the American publisher, Alfred A. Knopf. From the mid-1940s, Knopf commissioned and published translations of his works. But Freyre’s name remains obscure outside Brazil. Recently, Peter Burke and Maria Lúcia G. Pallares-Burke, who describe his work as “a social theory in the tropics”, have tried to underline the continuing relevance of his work.
Freyre was a precocious young man. He began his college education in the United States of America in Baylor University in Texas. During this time, he got to personally know W.B. Yeats, the Irish poet and Tagore’s great early champion. Even before collecting his degree at Baylor, in 1920, he joined Columbia University in New York and studied with Franz Boas who is often referred to as ‘the father of American anthropology’.
Shortly after his admission to Columbia University, towards the very end of October 1920, Tagore arrived in New York. Tagore was on a world tour to raise funds for Visva-Bharati. This was the third of his five visits to the US. Unlike the adulation that he received on his earlier visits, as an exotic novelty from the East, the reception now was tepid. Spurned by the Rockefellers and the Carnegies, Tagore spent most of his time cooped up in Manhattan.
On one occasion, some students from Columbia University were invited to a tea hosted in his honour. Among them was “a restless young South American eager to learn”: Gilberto de Mello Freyre. As Freyre recalled, writing in the early 1960s, Tagore was then as old as Freyre was at the time of writing: he was pushing sixty. Tagore’s “face... was surprisingly young, although his long beard and long hair were already completely white. Dazzlingly white.” But his voice, like that “of a girl, contrasting oddly with his virile, biblical prophet’s air”, surprised Freyre.
The students enthusiastically conversed with “one of the world’s greatest living poets”. The subjects spoken about were wide-ranging but predictable. Apart from the British presence in India, art, literature, religion and philosophy were discussed. Freyre was already under “the stimulating influence of Yeats” and, therefore, comparison was inevitable. Freyre considered both to be geniuses, although Yeats did not make himself “known by either wide, staring eyes or wild, unkempt hair”. In Tagore, Freyre saw the gaze and smile of an eternal child.
Apart from Tagore’s appearance, Freyre was charmed by his ideas. More than ten years after this memoir, he would reflect on his poetry in a short essay, “Tagore: A Brazilian view of his lyrical poetry”. Tagore’s “international spirit” and his desire that the East and the West comprehend each other held Freyre’s attention. As Tagore spoke about his dream project of building Visva-Bharati, Freyre admired the spirit behind it.
After the talk that afternoon — most likely to have been the lecture, ‘East and West’, collected later in Creative Unity (1922) — Tagore turned to Freyre. As Freyre was sipping some Indian tea, Tagore greeted him with the words, “You look like an Indian. Where are you from?” On hearing his reply, the poet remarked in his mellifluous voice, “Ay, yes, from Brazil”. Freyre wondered if Tagore was “reluctant to reveal either his knowledge of a country that was so remote or his curiosity about what was then a terra incognita to even the most knowing Orientals”.
Tagore’s fame apparently did not leave even the terra incognita untouched.

The author is a historian and Tamil writer based in Chennai
Posted by Paulo Roberto de Almeida at 02:15