The Devastating Reality of the Black Plague - Nicol Valentin 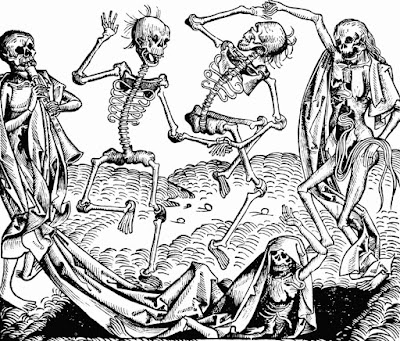 The Devastating Reality of the Black Plague

This might help you put the Coronavirus in perspective.

Writer. Blogger. History lover who can’t stand boring facts. Ain’t nobody got time for that. Come visit at historyunfettered.com

https://medium.com/lessons-from-history/the-devastating-reality-of-the-black-plague-9ecf759a4ab1
It was October 1347 when twelve ships pulled into the Sicilian port of Messina. From the outside, everything seemed normal enough, but horror struck the people when they saw the sailors on board. Most of them were dead, the rest barely clinging to life. Black boils oozing with blood and puss covered their bodies and they writhed and groaned in agony. The people in Messina had heard rumors of this hideous black death, and here it was in all its horror on the cusp of their shores.
Immediately the ships were turned out to sea but it was too late. Death had been unleashed. The people of Sicily were soon infected. In no time the sickness struck Marseilles, Tunis, and Rome.
It reached Florence, Bordeaux, Paris, and London. The disease spared no one. Young, old, rich, poor, all were susceptible. Over the course of five years, the black death would kill more than 20 million people, leaving whole towns decimated in its wake. In the end, one-third of Europe's population was dead.

Death From the Stars?

Recognizing plague symptoms was a cinch. A patient would first break out in oozing boils which could reach the size of an apple.
These appeared on the neck, groin, and armpits. The next stage brought fever, chills, vomiting, diarrhea, aches, and pains. Death followed shortly after. Finding what caused the plague, however, wasn’t so easy.
Medieval astrologers believed the stars influenced many things on earth, including one's health. Doctors at the University of Paris who were familiar with ancient astrological texts soon came up with the reason for the plague.
It was a triple conjunction of Saturn, Jupiter, and Mars in the 40th degree of Aquarius, which had occurred on the 20th of March 1345. According to Aristotle, a conjunction of Saturn and Jupiter would cause a disastrous event for sure.
Albert the Great had predicted a conjunction of Jupiter and Mars would bring plague. All three planets together would certainly bring terrible devastation.

How about Bad Smells?

Maybe the planets were involved, but certainly, bad smells had to be the cradle from which the disease emerged. And if putrifying scents were the cause, wouldn’t the opposite be the cure?
Those who ascribed to this theory did what they could to mitigate all offensive odors. Bottles of perfume were attached to belts, jewels and accessories were crafted out of perfumed paste, and scented balls and sponges accompanied people when they ventured out.
Vinegar was used freely on the skin and in the air since bitter scents were thought to be a good defense. Those strange costumes of the plague doctors with black robes and long beaks were created for just this reason. Inside the beak would be herbs, spices, and essential oils for the doctor to inhale.

Death from the Hands of an Angry God

Another prevalent belief was that the plague was a form of divine retribution.
There was too much greed in the world, too much blasphemy, and worldliness. God was mad, and the only way to stop it was to appease him. Processions of flagellants who whipped themselves with metal-studded straps traveled from town to town as a form of penance.
Others decided the best thing to do was to purge the world of those that offended God. Heretics and Jews being the obvious choice.
“Christians massacred Jews in Germany and other parts of the world where Jews lived, and many thousands were burned everywhere, indiscriminately,” wrote Jean de Venette.

“Doctors need three qualifications: to be able to lie and not get caught; to pretend to be honest; and to cause death without guilt.” — Jean Froissart’s Chronicles (1380)

A Gamut of Cures

Some advice was sound, like eat fruits and vegetables as opposed to rotting meat.
Those who ascribed to the belief that foul smells were the cause lobbied for keeping streets clean of all human and animal waste. Both of these are certainly good ideas, plague or not.
Of course, bloodletting was a go-to health procedure for any sickness, as long as it was done under the correct star. Lancing the boil was another option.
So far, the remedies are pretty standard. However, fear and panic caused lots of creative preparations to emerge. How about placing a live hen on the swelling, followed by a glass of your own urine twice a day?
Those against drinking urine could take the roasted shells of a newly laid egg, leaves and petals of marigolds, a pot of good ale and some treacle warmed over the fire. As with the urine, this was taken twice a day.
Other strange remedies included rubbing onions or a chopped up snake on the boil; eating arsenic, mercury, or crushed minerals; applying a mixture of tree resins, flower roots, and human excrement to the open wounds.


But what was it really, and how did it spread?

The prevailing thought is the black death was caused by Yersinia pestis or bubonic plague which is carried through rodents and other mammals.
It’s believed to have originated in China. Mongols controlled much of the territory at the time and had their eyes set on Caffa, a Genoese port on the Crimean Peninsula. During one of their many sieges on the city, the Mongols came down with the Black Death.
The Khan ordered the siege lifted, but unwilling to let his enemy go unscathed, ordered the bodies of his dead warriors be flung over the city walls. The plague spread rapidly, although a few sailors escaped. They returned to Europe, bring the disease with them.
It didn’t help that Europe had already suffered several setbacks prior to the onset of the black death. There was an earlier plague that affected livestock, crop failures, and several wars. Add to that the beginnings of the little ice age which caused colder and longer winters, and things were pretty much set up for disaster.

Now, although most historians and scientists subscribe to the Yersinia pestis theory, there are a few dissenters.
Professor Samuel Cohen of the University of Glasgow believes the disease was anything but bubonic plague. For one thing, the plague causes rats to die so profusely they would litter the streets.
In all the writings from the period, no mention of dead rats has been found. Not only that, but the black death affected areas where temperatures were too low for fleas to reproduce.
Iceland had no rats at all, yet deaths occurred there as well. Cohen also points out survivors of the black death seemed to have developed an immunity,
something that cannot happen with bubonic plague. Authors Susan Scott and Christopher Duncan agree. They point out the pattern of spread for the black death doesn’t fit that of common rat and flea born diseases.
The plague of 1374 swept from Marseilles to Paris at the speed of four kilometers a day. It was so fast one writer declared “instantaneous death occurs when the aerial spirit escaping from the eyes of the sick man strikes the healthy person standing near and looking at the sick.”
In contrast, bubonic plague can only move at rat speed. The bubonic plague that broke out in India in 1907 took 6 months to move 300 feet.
An outbreak in South Africa in 1899 took a year to move 20 kilometers. Most importantly, the Black Death spread from person to person, while the bubonic plague does not.

How did it end?

The Black Death epidemic ran its course by 1352, but the after-effects went on for years.
The structure of society completely broke down in many places. Agriculture suffered due to the lack of workers, and famine ensued. Yet by the end of the 1300s, things were beginning to look up.
Peasants became more prosperous, women gained some rights as far as property ownership, and surprisingly people were living longer. However, it would take 200 years for the population to return to pre-plague numbers. Those who managed to live would have lost everyone.