The outside world is right to worry, but must show finesse in its dealings with Brazil 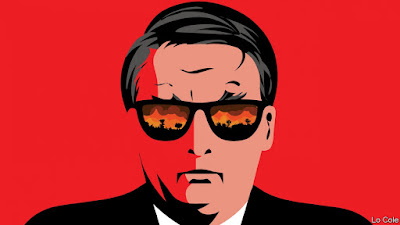 PICTURES OF FIRES raging in the rainforest.

A social-media storm in which #Amazon Is Burning dominated what passes for the global conversation. A war of words in which Emmanuel Macron, France’s president, branded as a liar his Brazilian counterpart, Jair Bolsonaro, who in turn accused Mr Macron of colonialism and mocked his wife’s looks. An offer of $22m from the G7 countries to help fight the fires, which Mr Bolsonaro rejected unless Mr Macron ate his words. It has been an extraordinary ten days for Brazil. Through the smoke, two things are clear: Mr Bolsonaro’s policies are profoundly destructive of the Amazon rainforest, and deterring him will take much more subtlety abroad and more determination from opponents and even allies at home.
A former army captain of far-right views, Mr Bolsonaro won Brazil’s presidency last year partly on a platform of reviving a moribund economy by sweeping away left-wingery and green regulation. He promised to end fines for violations of environmental law, shrink the protected areas that account for half of the Brazilian Amazon and fight NGOs, for which he has a visceral hatred. In office, his government has gutted the environment ministry and Ibama, the quasi-autonomous environmental agency. Six of the ten senior posts in the ministry’s department of forests and sustainable development are vacant, according to its website. The government talks of “monetising” the Amazon but sabotaged a $1.3bn European fund that aims to give value to the standing forest.
Ranchers, illegal loggers and settlers in the Amazon have taken all this as encouragement to power up their chainsaws. Deforestation in the first seven months of this year rose by 67% compared with the same period last year, according to INPE, the government’s space research agency. Mr Bolsonaro called INPE’s data lies and fired its director. His initial reaction was, preposterously, to blame the fires on NGOs.
Mr Bolsonaro’s approach is driven by prejudice and nationalism. “He deeply, ideologically, believes that environmentalism is part of a left-wing view of the world,” says Matias Spektor, at Fundação Getulio Vargas, a university in São Paulo. Brazil’s armed forces have long thought that outsiders have designs on the Amazon, and that they must develop it or risk losing it. The generals in Mr Bolsonaro’s cabinet, usually a force for restraint, are not on this issue. Behind his tirades against Mr Macron is the expectation that Brazilians will rally round the flag. That is why the world needs to tread carefully.
Mr Bolsonaro is right about some things. Mr Macron was high-handed in discussing the Amazon at the G7 without inviting Brazil. While the world has a legitimate interest in the rainforest’s fate, it doesn’t own it (though French Guiana has a chunk). Mr Bolsonaro is right, too, that fires were worse in some past years. Many maps exaggerate their extent.
Brazil has some of the world’s most stringent controls on deforestation. From 2005 these slowed the forest’s destruction dramatically, before they were undermined by budget cuts and now by Mr Bolsonaro.
Like Janus, his government faces two ways on this issue. Brazilian diplomats abroad present their country as committed to halting deforestation. At home, the president winks at those who practise it. That is why it is important to hold his government to its word.
“The main issue is how to get to a rational discussion about what’s happening,” says Marcos Jank of the Centre for Global Agribusiness at Insper, a university in São Paulo. That is something Brazil’s modern farmers want. They persuaded Mr Bolsonaro not to pull out of the Paris agreement on climate change, or abolish the environment ministry. They fear consumer boycotts and the EU pulling out of a recently concluded trade agreement, as Mr Macron threatened. In fact, both would have limited effect. Mr Jank notes that 95% of Brazil’s $102bn-worth of agricultural exports are commodities that don’t go directly to consumers; 60% go to Asia. But Brand Brazil has certainly been damaged.
Politically, too, Mr Bolsonaro is on treacherous ground. Although Brazilian nationalism should not be under-estimated, most Brazilians worry about climate change. As the president spoke on television on August 23rd about the fires, there were pot-banging protests in prosperous parts of cities, which helped to elect him. But halting his scorched-earth practices will require organised political action as well as protest. ■