Today's selection -- from Chiang Kai-Shek by Jonathan Fenby. The so-called "Rape of Nanking" witnessed atrocities that were among the most horrifying in the history of war. It was part of the Second Sino-Japanese War, which began in 1937 when Imperial Japan invaded China under Chiang Kai-Shek. Casualties in that war were estimated at between 20 and 35 million people. Nanking was the capital of the Republic of China and was upriver from Shanghai, China's wealthiest and most important commercial city, which had already fallen to the Japanese:

"The Rape of Nanking was unique as an urban atrocity not only for the number of people who died but also for the way the Japanese went about their killing, the wanton individual cruelty, the reduction of the city's inhabitants to the status of subhumans who could be murdered, tortured, and raped at will in an outburst of the basest instincts let loose in six weeks of terror and death. The death toll was put at 300,000 -- some accounts set it even higher, though one source for the former figure, Harold Timperley of the Manchester Guardian, used it to refer to deaths in the Yangtze Valley as a whole. 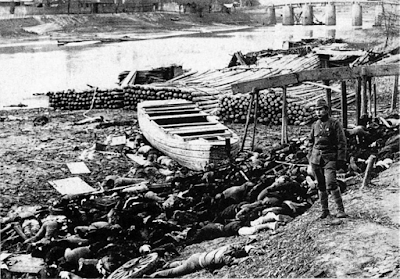 The corpses of massacred victims on the shore of the Qinhuai River with a Japanese soldier standing nearby.

"On the first day, a Japanese division killed more than 24,000 prisoners of war and fleeing soldiers. On the wharves by the river, coolies threw 20,000 bodies into the Yangtze before being killed themselves. Behind its white flags and Red Cross symbols, the foreign Safety Zone proved weak protection: indeed, by concentrating refugees there, it inadvertently provided a big target for the killers; the 'good Nazi of Nanking', the German John Rabe could only roam the streets trying to rescue individuals in his path.
"There were no imperial orders, as such, for the Rape of Nanking, and General Matsui gave senior officers a scathing rebuke after he entered the city for the victory parade on 17 December. But the general left for Shanghai two days later and, though he insisted there that misconduct must be severely punished, his words had no discernible effect. Any Chinese was liable to be a target. People were roped together and machine-gunned, doused with kerosene and set on fire. Thousands were buried alive -- or put in holes up to their necks and then savaged by army dogs. Others were frozen to death after being thrown into icy ponds. Japanese soldiers used Chinese for bayonet practice. Civilians were nailed to boards and run over by vehicles, Mutilation, disembowelling and eye gouging took place before executions. People were sprayed with acid, or hung up by their tongues. Medical experiments were conducted in a former hospital where Chinese, known as 'logs', were injected with germs and poisons. Women, young and old, pregnant and ill, were raped in enormous numbers, and then killed, some with sticks rammed into their ******s. Foetuses were ripped from the bodies of expectant mothers. Other women were taken to so-called 'comfort houses' set up for the soldiers, who called the inmates 'public toilets'.
"Japanese newspapers recorded a competition between two lieutenants to behead 100 Chinese with their swords. When they both passed the mark, it was not clear who had got there first, so the contest was extended to 150. One of the lieutenants described the competition as 'fun', though Japanese newspapers noted that he had damaged his blade on the helmet of a Chinese he cut in half. Revelling in their savagery, Japanese soldiers took photographs of the massacres and sent them to Shanghai to be developed; Chinese staff in the photographic shops passed copies to Rhodes Farmer who forwarded them to Look magazine in America in evidence of the horror.
"As the Nationalist capital, Nanking was obviously an important target where the Japanese wanted to achieve maximum humiliation of their adversary. But the sustained mass bestiality can better be explained -- if it can be rationally explained at all -- by the tensions that had built up in the army since the Shanghai battle erupted, by the knowledge of the Japanese troops that they were heavily outnumbered by the Chinese in the city, by the callousness bred in the previous four months -- and, above all, by the dehumanisation of the Chinese which had become part of the psyche of the Imperial Army. The invaders saw the people around them as lower than animals, targets for a bloodlust which many, if not all, their commanders felt could only spur their men on to fight better. In his diary, one soldier described the Chinese as 'ants crawling on the ground ... a herd of ignorant sheep'. Another recorded that while raping a woman, his colleagues might consider her as human, but, when they killed her, 'we just thought of her as something like a pig'.
"It seems certain that the Emperor in Tokyo knew at least the outline of what was going on. His uncle was in command, and Japanese newspapers reported the execution contests among officers as if they were sporting events. Hirohito still hoped that China could be defeated with one big blow, which Nanking might provide."