Rewriting North America’s trade rules will not be easy
The Economist, August 17, 2017 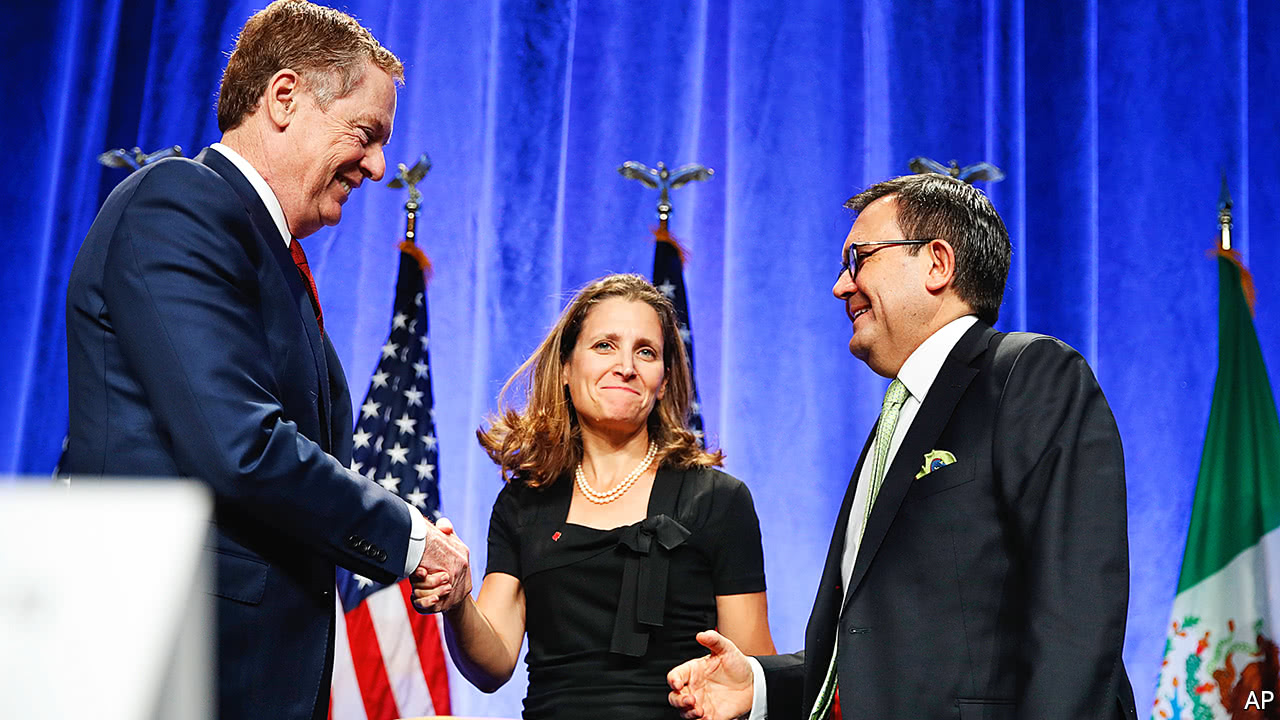 THE North American Free-Trade Agreement (NAFTA), a 23-year-old trade deal between America, Mexico and Canada, is being revamped. On August 16th, after months of threats, taunts and tweets, the first round of talks started in Washington. The negotiators face a daunting challenge, straddling domestic and foreign policy. They must please their political masters while grappling with devilishly detailed policy problems. If they fail, it will not be for lack of experience. The professionals are in the room.
This negotiation will be more tense than most. Participation in trade talks is usually by mutual consent. In this one, President Donald Trump is trying to hold his trade partners hostage, by threatening to withdraw from the original deal if a better one cannot be agreed on. That such an outcome would also hurt America does not make the exercise any easier.
Pressure is added by a desperately tight, if unacknowledged, deadline, set by the presidential-election timetable in Mexico. If no deal is agreed by early 2018, talks must pause to restart a year later. By then, Andrés Manuel López Obrador, a fiercely anti-American Mexican candidate, may be in power. Ildefonso Guajardo (pictured, right), Mexico’s economy minister, reckons there is a 60% chance that the deal will be renegotiated this year. The original NAFTA talks took three years.The first round of negotiations is when each side sets out its priorities. At the opening press conference the Mexicans and the Canadians both emphasised the importance of keeping the benefits of the existing deal. Less promisingly, Robert Lighthizer (pictured, left), the United States Trade Representative, said he wanted assurances that America’s huge trade deficits would not continue. Making the deal hinge on this would cross the others’ red lines.
Mr Lighthizer also spoke of making a pact that respects sovereignty, a swipe at Chapter 19 of the original deal. This sets out a process for resolving disputes over defensive tariffs, arbitrated by a panel of judges picked by the three partners. Mexico and Canada are open to making this process faster. But ditching it is unacceptable to the Canadians, who do not want to be vulnerable to American anti-dumping measures.
The talks will be split into groups covering specific negotiating areas. Labour standards and dispute settlement were on the agenda for the first day. Each side usually brings along some proposed text, often lifted from another agreement. On labour standards, American trade veterans may recognise some text negotiated for the Trans-Pacific Partnership, the Obama administration’s attempt—jettisoned by Mr Trump—to update NAFTA, and bring in nine other Pacific Rim countries. The Mexicans say they will find it difficult to agree to anything stronger.
The Canadians have the advantage of ready-made text from a recent deal with the EU. Its dispute-settlement rules watered down investors’ rights in favour of governments’ freedom to regulate. The Americans may reject that in the face of fierce resistance from corporate lobbyists.
Given the time pressure, tricky topics will be broached early. Procurement was on the agenda for day two. Chrystia Freeland (centre), Canada’s foreign minister, held up pictures of firefighters from the other NAFTA partners tackling Canadian forest fires as a symbol of co-operation. In other comments she was less friendly, declaring that “local-content provisions for major government contracts are political junk-food: superficially appetising, but unhealthy in the long run.” Yet to ease Canadian contractors’ access to American government business would irk Mr Trump, a staunch advocate of “Buy American”.

The bracket bulge
After the first round of meetings, the proposals will be merged into a single document. Uncontroversial items—a prohibition on customs duties for digital products, say—can be slotted in. Disagreements will be in brackets, indicating which side holds which position. The objective then is to remove as many brackets as possible.
Such talks make grubby mercantilist horse-traders of even high-minded negotiators. Perhaps the Canadians could parlay opening their dairy market for better access to American government contracts. Trickier decisions will require “political direction”, said Canada’s chief negotiator, Steve Verheul, who has set up a system to get speedy sign-offs from his superiors.
Rules relating to the car industry will be particularly contentious. Without that trade, America would have no deficit in goods with Mexico. At issue are the rules that set the amount of regional content a product must have for it to count within the deal. Without such rules other countries could exploit the pact to export tariff-free through a NAFTA member. Enticingly for the Trump administration, tight rules (and those in NAFTA are fairly tight) reduce imports from non-NAFTA countries.
Mr Lighthizer says that the rules of origin should require higher NAFTA content and “substantial” American content. The Mexicans will balk at any asymmetry in favour of America, arguing that it violates the spirit of a regional deal. Companies will resist too, and where non-NAFTA tariffs are low, they have the option of simply operating outside the parameters of the agreement. Tariffs on cars entering America are a mere 2.5%. For products where non-NAFTA tariffs are even lower, more than a quarter flowing into America from Mexico bypass the deal entirely.
The need for speed will probably oblige negotiators to sacrifice some of their ambitions. Complicated areas such as services or intellectual property may be jettisoned, or shallow agreements reached. Resolutions for historically difficult disputes, such as between America and Mexico on sugar, or between America and Canada on softwood lumber, may have to wait.
Ms Freeland predicted “some dramatic moments ahead”. Trade negotiators are inured to screaming, yelling, walkouts and all-nighters. Wendy Cutler, a negotiator under the Obama administration, says the tension is sometimes staged for the benefit of a domestic audience: “It’s not always what it looks like to the public.”